I never intend to halt my public writing. It just happens. A client invites me to work on interesting problem, which can lead to another interesting problem or client, and before long only the crickets remain here. During this latest, much prolonged, cricket chorus I’ve been helping clients pursue digital agenda items. It is critical to […]

From the esteemed Jeanne W. Ross on studying customer obsessed, digitally ambitious Nordstrom: DON’T: Only a small percentage of companies will gain competitive advantage from [social, mobile, analytics, cloud, and internet of things] SMACIT technologies. Those that do will focus less on the individual technologies and more on how they rally all those technologies, in […]

I’ve often said the future belongs to the dot-connectors. Webber’s Rule of Thumb #7, the System is the Solution, describes it perfectly:

My point is that embedded in every company, in every organization, is a system. When you see the system and not just the individual pieces you increase your chances of winning.

Most people look at a company and see the organization chart. Or the pyramid of functions. Or the products and services the company offers as output.

Systems thinkers see the relationships, not the functions. They see the processes, not the stand-alone components or the final products. It’s the difference between looking at a fence and noticing the barbed wire running horizontally rather than the fence posts standing vertically.

Sometimes it helps to do something as simple as drawing a picture with arrows to show what would otherwise be invisible connections. A drawing of a three-legged stool isn’t a sophisticated operations chart, but it makes the point about how magazines need to operate as a system.

Systems thinking can also help when you’re trying to solve a perplexing problem. If you want to untangle the clues as to how something went wrong, think like a detective: figure out who all the players are and how they relate to each other. Usually it’s the system, not one person or department, that explains the real cause of the problem.

One thing is sure: the future belongs to systems thinkers.

“Companies in all industries and regions are experimenting with — and benefiting from — digital transformation. Whether it is in the way individuals work and collaborate, the way business processes are executed within and across organizational boundaries, or in the way a company understands and serves customers, digital technology provides a wealth of opportunity.”

For the details:  The Nine Elements of Digital Transformation | MIT Sloan Management Review.

“The potential impact of digital technology varies widely by industry, but most enterprise leaders share an important challenge: how to get beyond the small share of the prize they are capturing today by looking for impact across the whole value chain.” 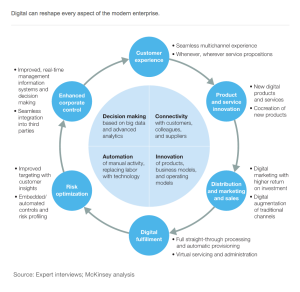 Reading a point-of-view piece by Cynthia Montgomery in Rotman Magazine reminded me of a soapbox tweet of mine: “we need to value execution on par with creation”.

That tweet was inspired by a consultation I did on a critical project that had fallen into the PowerPoint-to-Execution Gap.

This project made all the right upfront moves: defined a bold, yet attainable business vision, rallied executive support, hired a top talent technology consultancy, and hand-picked a skunkworks team.

Upon completion of the upfront, they had a well-defined business problem (process, requirements, data, roles), which would be supported by a state-of-art technology architecture. The creation portion was top-notch.

The problem was that company and project executives assumed that execution would take care of itself. They didn’t recognize that there is a strategic element to execution, involving not just scheduling, but careful packaging and orchestration of development, delivery, acceptance and business transformation activities.

In her Rotman piece, The Role of the Strategic Leader, Montgomery speaks to the often missed leadership component in strategic work, the “ongoing responsibility of leading strategy”.

“A great strategy, in short, is not a dream or a lofty idea, but rather the bridge between the economics of a market, the ideas at the core of a business, and action. To be sound, that bridge must rest on a foundation of clarity and realism, and it also needs a real operating sensibility.”

To illustrate her point, Montgomery — a Harvard Professor — describes how her MBA and Executive Education students inevitably debate the importance of strategy versus execution:

“Every year, early in the term, someone in class always wants to engage the group in a discussion about what’s more important: strategy or execution. In my view, this is a false dichotomy and a wrongheaded debate that the students themselves have to resolve, and I let them have a go at it.”

Montgomery revisits that early term debate with a real-world case on Gucci:

“I always bring that discussion up again at the end of my course, when we talk about Domenico De Sole’s tenure at Italian fashion eminence Gucci Group. De Sole, a tax attorney, was tapped for the company’s top job in 1995, following years of plummeting sales and mounting losses in the aftermath of unbridled licensing that had plastered Gucci’s name and distinctive red-and-green logo on everything from sneakers to whiskey — in fact, on 22,000 different products — making Gucci a cheapened and overexposed brand.

De Sole started by summoning every Gucci manager worldwide to a meeting in Florence. Instead of telling managers what he thought Gucci should be, De Sole asked them to look closely at the business and tell him what was selling and what wasn’t. He wanted to tackle the question “not by philosophy, but by data” — bringing strategy in line with experience rather than relying on intuition. The data were eye opening. Some of Gucci’s greatest recent successes had come from its few trendier, seasonal fashion items, and the traditional customer — the woman who cherished style, not fashion, and who wanted a classic item she would buy once and keep for a lifetime — had not come back to Gucci.

De Sole and his team, especially lead designer Tom Ford, weighed the evidence and concluded that they would follow the data and position the company in the upper middle of the designer market: luxury aimed at the masses. To complement its leather goods, Ford designed original, trendy — and, above all, exciting — ready-to-wear clothing each year, not as the company’s mainstay, but as its draw. The increased focus on fashion would help the world forget all those counterfeit bags and the Gucci toilet paper. It would propel the company toward a new brand identity, generating the kind of excitement that would bring new customers into Gucci stores, where they would also buy high-margin handbags and accessories.

To support the new fashion and brand strategies, De Sole and his team doubled advertising spending, modernized stores, and upgraded customer support. Unseen but no less important to the strategy’s success was Gucci’s supply chain. De Sole personally drove the back roads of Tuscany to pick the best 25 suppliers, and the company provided them with financial and technical support while simultaneously boosting the efficiency of its logistics. Costs fell and flexibility rose.”

The lesson from the Gucci case, according to Montgomery is clear:

“The only way a company will deliver on its promises, is if its strategists can think like operators.”

“In effect, everything De Sole and Ford did — in design, product lineup, pricing, marketing, distribution, manufacturing, and logistics, not to mention organizational culture and management — was tightly coordinated, internally consistent, and interlocking. This was a system of resources and activities that worked together and reinforced each other, all aimed at producing products that were fashion forward, high quality, and good value.

It is easy to see the beauty of such a system of value creation once it is constructed, but constructing it isn’t often an easy or a beautiful process. The decisions embedded in such systems are often gutsy choices. For every moving part in the Gucci universe, De Sole faced a strictly binary decision: either it advanced the cause of fashion-forwardness, high quality, and good value — or it did not and was rebuilt. Strategists call such choices ‘identity-conferring commitments’, and they are central to what an organization is or wants to be and reflect what it stands for.”

Returning to the student debate (and the PowerPoint-to-Execution Gap):

“When I ask executives at the end of this class, “Where does strategy end and execution begin?” there isn’t a clear answer — and that’s as it should be. What could be more desirable than a well-conceived strategy that flows without a ripple into execution? Yet I know from working with thousands of organizations just how rare it is to find a carefully honed system that really delivers. You and every leader of a company must ask yourself whether you have one — and if you don’t, take the responsibility to build it. The only way a company will deliver on its promises, in short, is if its strategists can think like operators.”

Successful strategy demands execution excellence, which starts with an execution strategist. Or, if you are lucky, with one of the rare strategists who think like operators.