Continuing my exploration of the four dimensions of Data Strategy. In this post, I bring together some earlier themes, including Pace Layering and Trimodal.The first point to emphasize is that there are many elements to your overall data strategy, and …

This is one of a series of posts looking at the four key dimensions of data and information that must be addressed in a data strategy – reach, richness, agility and assurance.In previous posts, I looked at Reach, which is about the range of data sour…

Transport for London (TfL) reckons around 3000 people are injured every year by slips, trips and falls on London buses. So it is running trials of an automated system that announces the departure of the bus from the stop.”Please hold on, the bus is abo…

Ten years ago (March 2006) I attended the SPARK workshop in Las Vegas, hosted by Microsoft. One of the issues we debated extensively was the apparent dichotomy between highly innovative, agile IT on the one hand, and robust industrial-strength IT on the other hand. This dichotomy is often referred to as bimodal IT.

But the interesting question was how to bring the two modes back together. Here’s one of the diagrams I drew at the workshop. 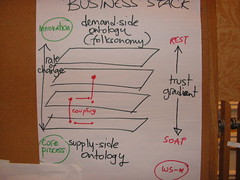 As the diagram shows, the dichotomy involves a number of different dimensions which sometimes (but not always) coincide.

Even in 2006, the idea that only industrial-strength IT can handle high volumes at high performance was already being seriously challenged. There were some guys from MySpace at the workshop, handling volumes which were pretty impressive at that time. As @Carnage4Life put it, My website is bigger than your enterprise.

Bimodal IT is now back in fashion, thanks to heavy promotion from Gartner. But as many people are pointing out, the flaws in bimodalism have been known for a long time.

One possible solution to the dichotomy of bimodalism is an intermediate mode, resulting in trimodal IT. Simon Wardley has characterized the three modes using the metaphor of Pioneers, Settlers, and Town Planners. A similar metaphor (Commandos, Infantry and Police) surfaced in the work of Robert X Cringely sometime in the 1990s. Simon reckons it was 1993.

Trimodal doesn’t necessarily mean three-speed. Some people might interpret the town planners as representing ‘slow,’ traditional IT. But as Jason Bloomberg argues, Simon’s model should be interpreted in a different way, with town planners associated with commodity, utility services. In other words, the town planners create a robust and agile platform on which the pioneers and settlers can build even more quickly. This is consistent with my 2013 piece on hacking and platforms. Simon argues that all three (Pioneers, Settlers, and Town Planners) must be brilliant.

Characterizing a mode as “slow” or “fast” may be misleading, because (despite Rob England’s contrarian arguments) people usually assume that “fast” is good and “slow” is bad. However, it is worth recognizing that each mode has a different characteristic tempo, and differences in tempo raise some important structural and economic issues. See my post on Enterprise Tempo (Oct 2010).

Updated – corrected and expanded the description of Simon’s model.  Apologies for Simon for any misunderstanding on my part in the original version of this post.

Dion Hinchcliffe, How IT leaders are grappling with tech change: Bi-modal and beyond (ZDNet, 14 January 2015)

Dion Hinchcliffe, IT leaders inundated with bimodal IT meme (ZDNet, 1 May 2016)

Dare Obasanjo, My website is bigger than your enterprise (March 2006)

Richard Veryard, Why hacking and platforms are the future of NHS IT (The Register, 16 April 2013)