More than 2,000 UK jobs were axed yesterday, as Game Group closed hundreds of shops after the company collapsed into administration. The beleaguered video games retailer, which had 610 UK stores, was unable to meet a £21m second-quarter rental payment due on Sunday and appointed the accountancy firm PwC as administrator. Is this the end of “High Street Retail” as we know it? Is it the beginning of the end?
The writing was on the wall for Game for some time now. Earlier this month,the struggling video games retailer had confirmed that a number of its suppliers were refusing to do business with the company, sending its shares down 63% to 1.29p. Back then Game said that while it was trying to resolve the matter “as quickly as possible”, it was unsure if its efforts would be successful. 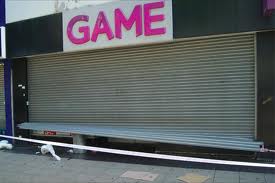 The Game is not the only retail business struggling for the past few years. Almost all high-street retailers have recorded reduced operating margins and profits, if at all they were there. The difficulties at Game are testament to the current squeeze on living costs coupled with a change in shopping habits and games technology. The group has also been battered by competition from cheaper rivals on the internet, such as Amazon and Play.com, and the major supermarkets. Separately, many people now download game Apps direct to tablets or smart phones, rather than buying software to be loaded in to consoles like the PlayStation, xBox on Nintendo Wii.
What the Game story tells us however is something unique where a Technology brand is being eaten by fast evolving technology business models. As Matthew Warman states in the Telegraph, “the story of Game is simply the first taste of what the web is doing to global retail – its products happen to be bought by users who migrated quickly to the web. All other specialist retailers are being challenged online: Whittards, to take just one example, is under pressure from specialist tea and coffee retailers such as Teahorse and Kopi, who will send subscribers superb selections every month, and cater to profitable, premium niches yet don’t have the overheads of high street rents and other associated costs. Many consumers simply see that they don’t have the inconvenience of shopping. Where Game led, even the most aromatic of products is set to surely follow.”

It was not so long ago that another high-profile retail venture went bust in the UK. It was in November 2011 that, Carphone Warehouse announced that it was to close all of its 11 Best Buy stores across the UK. The first Best Buy store in the UK only opened in April of last year. But the outlets failed to make a profit. Carphone Warehouse and Best Buy initially planned to open 200 Best Buy stores across the UK and continental Europe. But clearly they had to abandon those plans well and truly before they could take-off. Is there market left for technology shopping on UK high-street? Probably there is and there will be always that small niche segment of shoppers who prefer to touch their electronic goods, CDs, Games and likes before they buy them. But that segment is shrinking all the time and internet players will certainly be calling the shots in this segment of Retail market.