In face of uncertainty and rapid pace of change, flexibilities like a car’s spare tire can be useful for systems and enterprises.  An example of a flexibility is stronger beams in a parking structure.  A shopping mall might choose to build less levels of parking initially, but by putting in stronger structural beams, additional levels of parking can be easily added.  Another example of flexibilities is hiring contract workers.  Hiring in this manner makes future scaling back of operations less costly.

However, these flexibilities come at a cost.  Stronger beams cost more, and contract workers have hidden costs like long term commitment to the company.  How then can one decide what flexibilities are needed and how much of it is needed?

One possible approach is through the use of Excel modeling and simulation.  MIT Professor Richard de Neufville‘s class taught this approach.  Through not-too-complicated modeling in Excel, we were able to include into a standard financial analysis several flexibility designs.  For example, we were looking at the manufacturing of a product, and one flexibility we included was to produce more in years when production costs are low.  Then, through simulation, we were able to evaluate flexibilities for their effectiveness.  For example, as shown in the chart below, we found that we were actually worse off with one of the flexibilities as the Net Present Value (NPV) of the project was lower with the flexibility compared to being without. 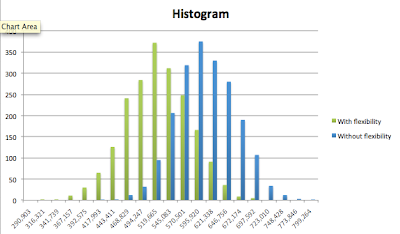 This is a useful approach, though one key challenge is to come up with a good approach to compare different flexibilities.  In the above example, the NPV is used.  However, there are many other scenarios where there is no single number that can be used to evaluate the “goodness” of a scenario.  For example, in building public housing to meet the needs of citizens.  One design might house more people but cost significantly more than another design.  When then is a better design?  In addition, even in the NPV scenario, the outcome is a distribution of values, so the “goodness” of a flexibility often also depends on the risk appetite of the decision maker.

Lastly, a key insight I got from the class is that it is a mistake to think that including flexibilities in systems will be more costly than not including them.  If you compare building a parking facility with four levels, versus one with the same number of levels but stronger beams, which one would cost more?  Obviously the one with stronger beams!  However, this is not the correct comparison, and this is the key cause of the misconception.  The correct comparison should be to compare the stronger beam building against one with more levels.   Why?  Because the parking facility without stronger beams is built without any plans for future expansion, so it should have more levels to cater to growth in demand.