I need to do a follow-on to my previous post ‘The bucket-list‘, to add a few clarifications.

It’s not that I’m doing a “I’m taking my bat and ball and going home so there”.

It isn’t even about the money – though the lack of being paid more than a tiny pittance at best for so darn long definitely does hurt.

If you know what burn-out is like, then you’ll know what I’m going through right now.

If you haven’t been through burn-out yourself, let’s just say I wouldn’t recommend it, ‘cos it ain’t fun. In normal times I’m not far short of a workaholic, yet for the last three-four months or so I’ve been running at around 20% of my normal productivity at best. For anything. And worrying, worrying all the time that I haven’t been able to do what I ‘should’.

That’s why I can’t do this any more.

It’s also why I’m probably not up to doing much mainstream consultancy or anything like that at the present, either.

This is actually the fourth time in forty years that I’ve been through burn-out. Four different disciplines now that I’ve rebuilt or renewed, pretty much from scratch, against huge opposition every time, with huge value for large numbers of others at the end, but with burn-out for me instead. I won’t go through them all, but the second, back in ’86, was after spending eight years working flat-out building the precursor to desktop-publishing, from scratch – including writing all the software myself – only to be ripped-off and then flattened by all the big-boys as soon as they realised that all the hard work had been done and there was now serious money to made. (Yep, that was someone else making millions out of my work, with nowt but the smallest crumbs coming my way. Again. Common experience for any pioneer, of course.)

But at least this time there’s no need to throw anything away. At the moment the books and websites and the rest are all (just about) self-financing. Don’t worry: nothing’s going to get lost. Not yet, anyway.

What the bucket-list does mean is that right now I can’t do any further development on any of what’s in that list. Sitting in the bucket right now is probably the only (near)-complete set of tools – visual-checklists and all that – that, in broad-stroke terms at least, cover the entire scope of an enterprise, at every scale, in a fully-integrated, fully-consistent way. That’s worth saving – not least because it or something like it is going to be really needed as the whole mainstream ‘possessionist’ economic-model comes apart at the seams. Which it will do within the next few decades at most. (Because if it doesn’t, we’re dead. All of us.)

But I’m not the person to take it to that next stage. It needs someone with a different mindset than mine, much more practical, a better instructional-designer, a better graphic-designer, not least a better marketer than I am.

That’s what I mean when I say I need concrete support to make it happen. It’s not (much) about money. It’s about how we work collectively to develop the tools and more that we need for the kind of whole-enterprise architectures that will become essential Real Soon Now, and on which some of us have been working for quite some while already.

There is no nice shiny grandiose association or standards-body that will do this for us. Forget the Open Group, for example – by the terms of their charter, they cannot think any wider than a specific subset of IT, and that’s fine as it is (though it would help all of us if they’d just stop pretending that what they ‘sell’ is enterprise-architecture, because it isn’t…). Ditto OMG; ditto BizBOK; ditto just about every other standards-body, really. If it’s going to happen, the EA community needs to get together as a community, and make it happen, for everyone here. It’s our responsibility – no-one else’s.

I say ‘our’ there, but in practice, I won’t be able to contribute much for quite a while. If my recovery from this burn-out goes as well as the previous ones did – and to be blunt, I’d be lucky there – then it’ll still take several months even at best before I’m properly back up to speed again.

If and when I do recover, I’ll need to move the whole thing up a notch anyway, to the scope and scale of the full RBPEA (‘Really-Big-Picture Enterprise-Architecture’). Most of what’s happening at the mainstream EA level is pretty straightforward now; at the RBPEA scale, it is not straightforward – and again, what’s in that bucket-list is some of what will be most needed out at that level. But I’m nowhere near ready to come back to that as yet.

In the meantime, I’m trying to keep (somewhat) sane by shifting my focus more towards to fiction. With an EA or RBPEA slant, of course, but fiction nonetheless. One book pretty much complete now, and quite a lot (some 200 pages) also done so far on a much larger project that’s already gaining quite a lot of interest. For your possible amusement, and as a small taster of what’ll be coming up soon from me in that direction, here’s a crop from a much larger sketch-illustration by my nephew Joseph Chittenden, for a standalone section from that project, called ‘The Frenchman’s Journal’: 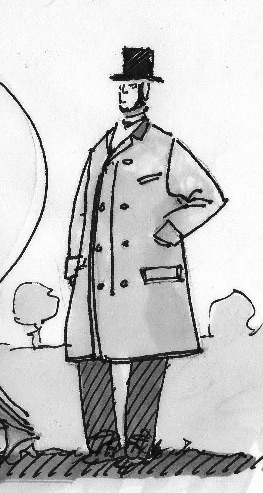 Think of it as therapy if you like – but, compared to EA, at least writing fiction is a lot more fun.