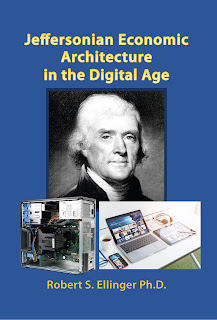 Currently, the political situation in the United States is similar to the political chaos in the 1850s—moving toward the Civil War.  Like the Civil War, it is a war between economic architectures, “crony” capitalism and Marx’s Communism.   However, there is a better way, returning to the organizational economic architecture of the founding fathers, in particular Thomas Jefferson.

There is a second overriding issue, of which we are all aware, the change from the Age of Print to the Digital Age that is creating more cultural (and even biological) change than most people are aware of.  Right now, the smart phone is becoming the third lobe of our brains.  It remembers the phone numbers of our contacts, it enables us good asynchronous communications with them (in the form of text messages and email), it tells us the weather (current and future), it sings to us the music we want to hear, it even tells us where to drive our vehicles, and so much more.

But it also knows where we are, what we are doing, what we’re interested in, and who we are doing it with.  In the near future it will enable politicians and bureaucrats to control all our activities; that is unless advanced artificial intelligence enables the technology to take over and reduce humanity to slaves of the singularity.

Again, there is a better way.  My book, Jeffersonian Economic Architecture in the Digital Age discusses an alternative.  It starts, in part 1, with a new theory of the definition and source of economic value. In this part economic value and wealth is defined as a direct result of knowledge. An increase in knowledge increases the organization’s ability to survive and thrive.  It goes on to demonstrate that this concept and theory is very likely to be true.

Part 4 interlinks this organizational model with both the Declaration of Independence—mostly written by Thomas Jefferson—The US Constitution—of which he was involved—with recent technological concepts of Services Oriented Architecture and Cloud Computing to produce a political/economic architecture that allows and enables everyone the “pursuit of happiness” wherein “pursuit” means work at what they want to do and have a talent for.  It also means that there will be a great many more millionaires and very few billionaires, that is, it enables sharing the wealth rather than forcing the wealth through governmental redistribution taxes.

While it would be nice to receive royalties from the sale of this book, my purpose for writing it is my hope the people will take a serious look at the political right and left, and technology change, and consider the far-reaching consequences of not starting from the concepts in this book to transform the political/economic system without having a pyric civil war.

I would appreciate any thoughts or ideas you have on this paper or on Jeffersonian Economic Architecture in the Digital Age.