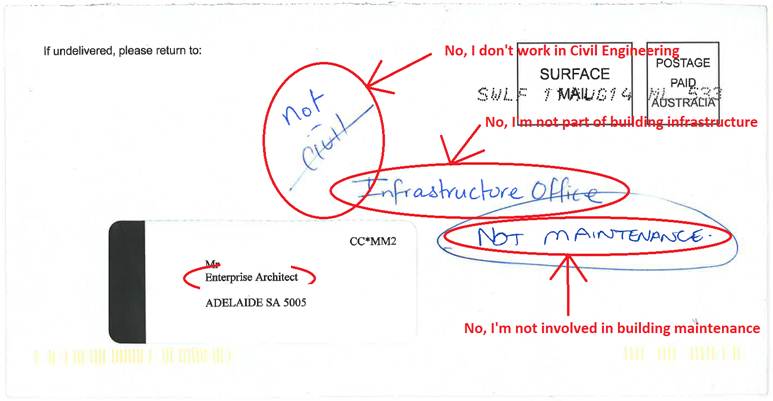 Nope, enterprise-architecture is not the same as civil-architecture; nor is it building-maintenance; nor is it anything much to do with the infrastructure-office – whatever that might be.

But nor, however, should we misdescribe EA in the way that this person did, in a current thread on one of the LinkedIn groups:

The fact is EA is a specialism within IT.{don’t you just love acronyms /or not}.

No, enterprise-architecture is most definitely not merely “a specialism within IT”: that specialism, as Peter Murchland pointed out a couple of posts later in the same thread, would be more properly called EITA, or ‘enterprise-wide-IT-architecture’, which is a related discipline to EA, but with a much narrower scope. Which misdescription is a darn nuisance, because, to quote another person on that thread:

The EITA thing sure does muddy the EA waters a bit.

More than just a bit, actually: it often muddies the water into utter impenetrability. And, like solution-architecture, EITA is not really ‘part of’ EA – another common mistake, repeated by yet another person in that same thread – but instead is kind of encompassed within the overall scope of EA, but in a different way, somewhat as described in the ‘Governance is not an end in itself‘ post.

The role of enterprise-architecture within the organisation is pretty straightforward: it’s tasked with supporting a theme that ultimately is the responsibility of everyone in the entire shared-enterprise – that things work better when they work together, on purpose. Hence, yes, EAs will develop models and diagrams and roadmaps, and do governance-work and guide many, many conversations between various stakeholders and ‘concerned parties’: but the architecture itself still always remains everyone’s responsibility. Much like health-and-safety is, for example, or security, or quality, or financial-probity.

Yet because of that bewretched confusion between EITA (which really is IT-only, for the most part) and real EA (which definitely needs to be about much more than just the organisation’s IT), we’ve reached a point where we almost dare not use the ‘A’-word – ‘architecture’ – at all. Especially if it means that our mail gets redirected at random to the civil-engineers, then the building-maintenance crew, then the plumbers and the cable-guys, and then finally the IT-architects, who might perhaps deign to pass it on to us. Yeah, it’s a mess…

So perhaps it really is time now to give up on this, and use some alternative term instead. Some folks push for ‘business transformation‘: but that might well be misunderstood as applying solely to commercial businesses, whereas our work applies just as much to government, to not-for-profits, and other non-commercial contexts. Some folks push for ‘business-architecture‘ as the all-encompassing superset: but that brings us back into much the same mess with the ‘A’-word again, and in any case business-architecture proper is merely another domain-architecture, much like EITA – in this case, the literal ‘architecture of the business of the business’. To me those kinds of alternatives just don’t work – or at the least don’t work well enough for what we need.

One possible alternative I’ve heard recently, though – from Peter Murchland first, I believe? – is enterprise awareness: our work as EAs is to help the organisation build a better awareness of itself, and of the broader shared-enterprise within which it operates – and from there, develop better awareness of its options, and appropriate actions in respect of those options.

And we could still call it ‘EA’, too.